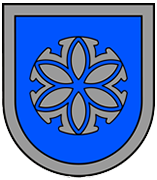 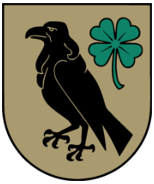 Installed in November 5, 1971, in memory of the fallen Soviet soldiers during the WWII. The architect of the memorial ensemble is Oļģerts Krauklis. The sculptor - Guna Zvaigznīte. The monument consists of a figural creation and a relief mural. The component of the ensemble is a figura of a woman, the material of the sculpture is copper, which is little used in monumental sculpture. The sculptor created a sitting woman, that, saddened by the fallen heroes, is leaned over a kokle (traditional Latvian instrument that resembles a lute). The 3,5 m high figure has a general character. In the concrete plate covered area, the figure is installed aside, as to not reach the travertine wall with a relief mural and memorial plaque. The contraposition of the composition is a metal plaque with the names of the fallen soldiers. In dark, the metal plaque creates a visual connection with the ground, but the travertine wall with a relief mural has a tendency to sort of rise above it. The wall itself is created from a different sized blocks, thus creating an ornament.